Saboe Chiropractic Clinic has been open since 1956

Dr. Saboe began his Albany practice over 30 years ago in 1981, a practice established by his father Dr. Vern Saboe, Sr., in 1956. He grew up in Albany graduating from West Albany High School and completing many of his undergraduate studies at Linn-Benton Community College. Dr. Saboe and his wife Jeri who were high school sweethearts have given their lives to our Lord and Savior Jesus Christ and attend North Albany Community Church. Dr. Saboe has two sons, Jackson and Ammon. Jeri has two daughters Taylor and Nicole. 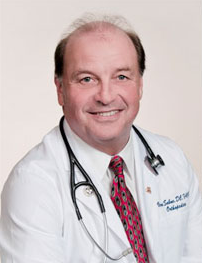 In the evidence-based model, objective data is crucial in evaluating patient’s in both determining proper treatment and in evaluating both progress and effectiveness of chosen treatment methodology. One method of evaluating the cervical spine for whiplash is the use of simultaneous measurement of range of motion and muscle guarding, as recommended by John Gerhardt, MD, author of the AMA Publication “A Practical Guide to Range of Motion Assessment”. As Gerhardt stated in his written evaluation of this technology, known as DynaROM, by combining muscle guarding measurement we effectively increase sensitivity and specificity of range of motion measures. The process is simple: With electrodes attached, using EKG technology, we simply perform a standard range of motion assessment but with the simultaneous measurement of muscle guarding. Muscle guarding is the body’s natural defense mechanism to pain and spinal dysfunction, and clinically provides a wealth of information one cannot achieve through the typical subjective measures, including range of motion.

Dr. Saboe provides expert evaluations and treatment of auto “whiplash” injuries and On the job injuries as the only chiropractic Physician in Oregon who Is “board certified” in all three specialties of Orthopedics, Neurology, And Forensic Medical Science. Focusing on the treatment of “slipped Discs” (disc herniation) Dr. Saboe has prevented many unnecessary spinal surgeries.